My Thoughts on The Goonies! 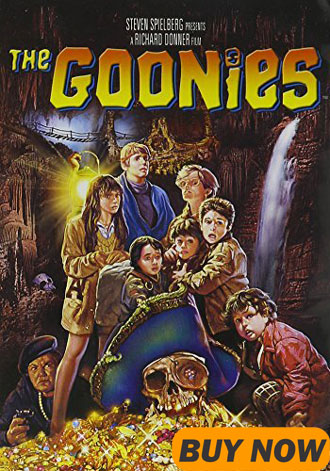 Click Above to get your Copy of The Goonies Today!

The Goonies is a exalting fantasy adventure movie for young and the young at heartl. The brainchild of cinematic master Steven Spielberg. The Goonies takes a series of obstacles that the children must overcome in order to save the day.

The movie follows the exploits of a local group of kids who call themselves The Goonies. Upset that they’ll soon be kicked out of their home to build a golf coarse and have to part ways, the children are enjoying their last time together.

But while Mikey, Mouth, Chuck, and Data (the nicknames of the Goonies respectively) are exploring Mikey’s attic, they find a hidden treasure map in the back of an old picture frame. Supposedly, the map leads to the long lost treasure of the famous pirate “One-Eyed” Willy. Along with Mikey’s older brother Brandon and two neighborhood girls, Andy and Stef, the group sets out to find the pirate’s vast wealth and thus save their homes from the wrecking ball.

Just one small problem stands in their way. The treasure map’s starting point is under an old abandoned restaurant used as a hideout by the infamous Fratelli crime family. Brothers Jake and Francis, along with their deformed yet gentle brother and mean mother. When the Goonies manage to uncover the entrance to the cave only by accident that holds their treasure, of One-Eyed Willy. Chunk is left behind. The Fratelli’s savagely interrogate the boy in an attempt to find out what happened to his friends.

With the Fratelli’s hot on their heals, the Goonies must pass through a series of traps before uncovering the pirates loot. This is all done with a number of clever and humorous one-liners that add to the overall audience enjoyment of the movie.

In the end, the children discover One-Eyed Willy’s big loot. But can they stave off the greedy aspirations of the Fratelli family? Will they manage to save their homes with the newfound treasure? You’ll have to watch to find out, and trust me, this show is a lot of fun.

Each of the actor contributes to the movie in his own way. Mouth gives many moments of comic relief with his jabbering. Data’s constant deployment of homemade inventions, that are stretching the limits of reality. Not to forget about Chuck’s truffle shuffle, are a welcome addition to a fantasy adventure movie tailored for a young audience.

Get your DVD copy today so a new generation can find out the thrill and wonder of this cinema classic. The Goonies passes the test as a certain must-see film. If you haven’t seen it, or even worse – if your children have been deprived of seeing it – then I highly recommend you buy this one today.

“I don’t dream at night, I dream at day, I dream all day. I’m Dreaming for a living” — Steven Spielberg.

[in Spanish] “The marijuana goes in the top drawer. The cocaine and speed go in the second drawer. And the heroin goes in the bottom drawer. Always separate the drugs.” — Mouth. 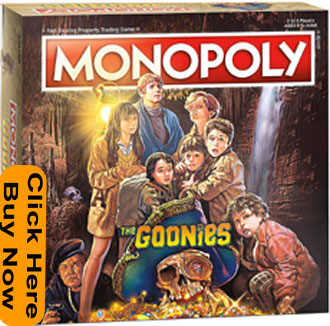 Get your Copy Today!

Attempt to be the last player with loot! “Never say die!” is the motto with Goonies-themed Monopoly. Go on a quest after One-Eyed Willy’s buried treasure and bargain, and trade places around Astoria, Oregon in this adaptation based on the classic 80’s adventure movie! The hotels are treasure chests, and the houses are called booby traps. Play with collectible souvenirs such as Willy’s eye patch, Gold Doubloon, Chester Copperport’s Key, and other memorable items. The play money features the cheerful faces of characters like Sloth, Mikey, Chunk, and Data. So it is time to do the truffle shuffle to get your hands on The Goonies Monopoly Today.

“Listen, Sheriff, I know I’ve jerked you around before, but this is for real now. I’m in the Fratellis’ basement, with this guy…” — Chunk

Where are They Now

Jeff Cohen (Chunk): Jeff Cohen, the actor who played Chunk, quit acting shortly after the film. He is still “in” the entertainment business, just not in front of the camera. Cohen is now an  lawyer at Cohen Gardner Law in Beverly Hills, and in 2011 he wrote a book called The Dealmaker’s Ten Commandments.

Ke Huy Quan (Data): Right before Goonies, Quan played Harrison Ford’s sidekick in Indiana Jones And The Temple Of Doom (1984). A role in the TV show Head Of The Class (1990-1991), Ke Quan started doing work behind the camera as a Cinematographer and stunt coordinator. Now he is back to acting in (2002) with Second Time Around.

Joe Pantoliano (Francis): Besides having considerable roles in The Sopranos (1999-2006), Sense8 (2015-2017), La Bamba (1987) The Matrix (1999), Bad Boys for Life (2020) Pantoliano is also an author. His book entitled Asylum: Hollywood Tales from My Great Depression: Brain Dis-Ease, Recovery, and Being My Mother’s Son details his struggles with depression.

Anne Ramsey (Mama Fratelli): In the 1970’s, Ramsey played minor roles in TV shows, including Columbo, Mary Hartman, Mary Hartman, and Starsky and Hutch. She would not get her first big break until The Goonies. Ramsey followed up Goonies with Danny DeVito and Billy Crystals’ movie, Throw Momma from the Train (1987) where she received an Oscar nomination. Ramsey sadly died from cancer August 11, 1988 at the age of 59.

The Goonies: Original film Soundtrack was published in conjunction with the 1985 adventure movie The Goonies. The record album is known mainly because it has the song “The Goonies ‘R’ Good Enough” by singer Cyndi Lauper, who also did a cameo in the film (as herself, doing the song on television). Plus exclusive tracks by REO Speedwagon, The Bangles, and Luther Vandross, has been recently remastered for this exclusive Amazon.com vinyl release. It’s the perfect value for vinyl record fans! 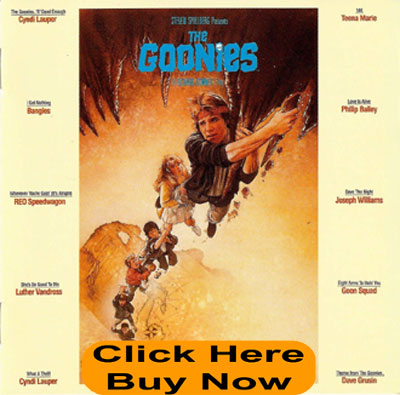