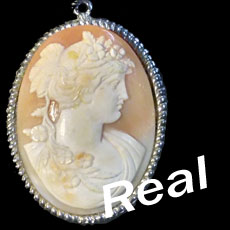 A cameo is a shell, hard stone or gem carved to illustrate a scene or figure, in most cases with different colors for the foreground and background. Cameos were first used in ancient Rome. During the Renaissance period, antique cameos were rebuilt in sophisticated enamel and gold settings. Throughout the 17th and 18th centuries enthusiast princes revived the art of cameo. During the 19th century, bulk-produced items were bought as tourist pieces, preserving their popularity until the 1940’s.

1. Start with looking at the setting as that is probably the simplest way to determine the age of the cameo. A fine example is in a gold setting. Check the pin if you are dealing with brooches. If there is a safety catch included with it, it is most certainly a fairly modern item. The mount’s style should also be considered. Starting from the 1820’s and until to contemporary times, a classical setting was given to most cameos (it is explained by the fact that these were purchased by tourists in Italy) and frequently with a rope-like shape surrounding outer edge. Previously, mount often included jewels and enamel.

2. Carefully examine the cameo itself and try to determine the material it is made of. Initially, the first cameos were made from half-precious gemstones, while in the Medieval and the 18th century hard stones, including onyx were used. Later on, throughout the 19th century sardonyx, a sort of white and pink agate became quite popular with an increased demand to imitate sardonyx. Thus, in the last quarter of the century, conch shells were used to craft cameos. Thanks to its concave back, it is relatively simply to recognize a shell cameo. Some other materials that were used include agate, ivory, carnelian, lava, coral, jet, bone, mother of pearl, and various gemstones.

3. How To Tell The Age Of A Cameo at the carving and examine how subtle and crisp are the hair and drapery details. There are cameos which were crafted in a hurry by a journeyman, but there are others that were made by genuine artists. In most cases the heads in profile on shell cameos are after the date of the full figures.

4. Pay attention to the face on the cameo as they will probably suffer slight changes over time. Faces with a strong, “Roman” noses are usually dated before the 1860’s. If the hairstyle or the nose reminds you of a fashion catalog from the 1950’s, there are high chances for the item to be a 1950’s cameo.

Other Tips and Considerations 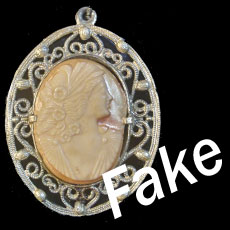 A. Pay attention and look out for counterfeit resin or plastic cameos. Try to see if there are glue blobs on the back of the mount.

B. The cameos temperature is another indication. Place the cameo in your hand, a stone or real shell will feel fairly cool to the touch, however plastic will quickly warm up due to the temperature of the room and the heat from your hand.

C. Whenever you judge a cameo, the actual age of the cameo is not as important as the quality of its carving. Fabulously finished models in gold mounts will be considered as first-class by all collectors.

Here are just a few ways to help you identify the age of your cameo jewelry. Another great way is to find a reputable dealer to help you determine the difference between real and fake cameos. Come and checkout our collection of cameo jewelry at Kilroy Was Here Shenandoah Ia.